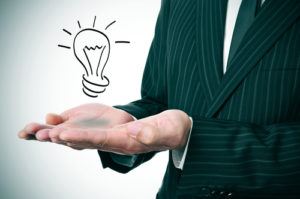 Not every great idea is patentable. Lots of people come to me with some really good ideas, but unfortunately, they don’t pass the test of something that is new and non-obvious.

How does something qualify as new and non-obvious?

I was looking out my window this morning and I saw the leaves starting to fall on the lawn. Many times people will come up with an idea of how to get rid of those leaves that requires adapting a tool that is used to clean the house — like taking a vacuum cleaner and installing a larger engine to handle the leaves.

It doesn’t mean your idea is a bad idea! It just means that it’s not protectable under the patent laws in this country.

However, if you take a tool or device that is used for one purpose, such as vacuuming, and you increase the size of the motor so you can suck up leaves and you need to modify it so that it works, that modification may be patentable. If you have to come up with a novel way of solving that problem, the solution in combination with the vacuum cleaner or by itself may be patentable.

These are important considerations to make before you contact a patent attorney.