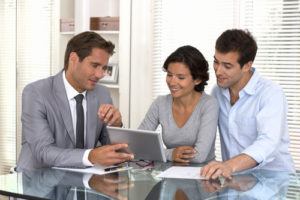 Every so often, when I’m expecting a client to walk in the door for their first appointment, I’m surprised to see two people walk through the door. The first thing I ask is to be introduced. Then I ask them what their relationship is. That may seem intrusive and nosy — especially when I ask them to give me their full name and address, so I have a record of who was present at the meeting.

Why do I need to know what the relationship is?

There’s something called confidentiality and privilege between an attorney and a client. These are very important concepts. Anything a client tells me is automatically covered by confidentiality; I am never permitted to reveal anything that is confidential to anyone else. In fact, until a trademark is registered, or a patent is issued, I can’t even tell you who my clients are. Once the patent is issued and the trademark is registered, of course, it becomes public information.

Why do I ask who this other person is?

If there is a strong relationship between the two people — like a marriage or business relationship that involves obtaining a patent or registering a trademark, then they’re also a client. They’re part of the case. In the case of a patent, if the inventor and the business associate are forming a company or formalized business arrangement, then the other party, who may be providing funding, is part of the case.

Why do I need to worry?

Every so often people will get nervous about meeting with an attorney, just like they get nervous when they go to the dentist or doctor, and they want to bring a friend along for moral support. Well, unfortunately, when a third party is present during a communication between an attorney and a client their presence breaks confidentiality and privilege. Why is that important? If we’re discussing the patent and down the road, the patent is in a lawsuit, I may be called upon to testify about how the patent was obtained. If a third party had been present, then privilege has been broken, and I’ll be forced to share all communication between the client and myself. It’s very important not to have a third party present, who’s not part of the case when an attorney and client meet.

No, I really don’t want to know about the extent of your relationship, other than it’s a marriage, or a business partnership, or something else where the other party has some skin in the game. I just need to know who they are. If that person is not part of the case, I have to explain that having this third party present in our conversation breaks privilege and confidentiality.

I’m not being nosy, I’m trying to protect you!