Pass Go & Collect: How to Patent Board…

Pass Go & Collect: How to Patent Board Games 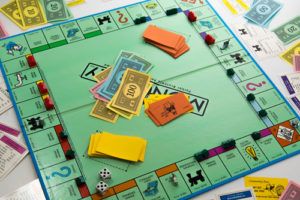 The Story of Monopoly…

There’s some controversy about the 1935 patent: Darrow learned about another game called “The Landlords’ Game” that was patented in 1904 by a woman named Elizabeth Phillips. That game was created as an educational tool about monopolies in the landlord/tenant context. Darrow first played The Landlord’s Game in 1933; he changed the game enough to earn a patent on his version, Monopoly, two years later. Monopoly was one of many board games that became popular in the post-Depression 1930s, when people couldn’t afford to go out much.

The original Monopoly game was based on the streets in Atlantic City. Since the patent on Monopoly expired, many towns and cities have adapted the game to include their own streets and landmarks, and have sold the games as  fundraisers for their local Chamber of Commerce, JayCees or their local Rotary International chapter. There are multiple electronic versions of Monopoly out there as well.

What Makes a Game Patentable

Many factors must be present in order for a game to be patentable. First, it must be unique. Therefore, the adaptations of Monopoly mentioned above are not themselves patentable. Second, is must be useful. Games are considered useful. Third, it can’t be a combination of two or more other games.

One thing to keep in mind when inventing a board game is alternate ways of playing. For example, although Darrow included a set of long rules in the original Monopoly game, there was also a rule that enabled players to shorten the game (as you know, when there are a lot of players, a Monopoly game can last for hours or even days). If you come up with alternate rules, make sure to include them in your patent application.

If you apply for a patent on a board game, you must submit a copy of the actual game (including the game board and its pieces). And don’t forget to apply for patents on electronic versions of the game as well. Soon, you’ll have your very own board game monopoly!