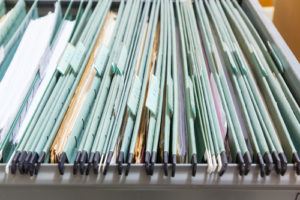 Most people who are filing for a patent in the United States don’t even realize that, at the same time, they’re applying for a foreign filing license.

So when your application is filed electronically, you receive an acknowledgement that lists all the documents you have filed with the Patent Office, such as the specifications, the drawings, the claims, the declaration of the inventor and a fee, of course. It assigns a serial number and a confirmation number, both very important pieces of information. But, technically speaking, you’re not allowed to take the invention and file it in another country yet.

Shortly thereafter — and shortly may be a week or it may be a month — you’re going to receive what is called the official filing receipt. I tell my clients, when they receive it, to keep it in a safe place. I ask them to store it where they store other important documents. This important documents tells you whether you have a foreign filing license.

So, you have all the parts that are necessary to establish a filing date for your application: the specifications, drawings, declaration and claims. If one of those pieces of file information are missing or is incorrect, they will send you a notice of missing parts. Make sure you get that cleared up if you did not receive the official filing receipt.

When you get the official filing receipt, it tells you all the pieces that are there. It also reiterates whether you’re claiming priority back to a provisional application or some other type of filing. Your attorney is also listed.

If your foreign filing license is granted, that means you can now file anywhere in the world, as long as it’s within the rule of the Paris Convention or the Patent Cooperation Treaty. But if you have something that is related to national security, you won’t get a foreign filing license. Because then, if there’s some question, any vested national security agencies will review the filing to determine whether the filing should be allowed to be published when it’s granted, or published as an application.

So, although it’s very rare, it can happen. Generally speaking, there are people who know they’re working in that area. Now, assuming you have some sort of invention that has nothing to do with national security, and you developed it in the United States, what happens if you file someplace else first? Well, you could absolutely, permanently lose your US rights if you don’t have that piece of paper that says you have a foreign filing license.

It’s very important that, if you’re a US inventor, you somehow make a filing in the United States to get the foreign filing licence, or go to the Patent Cooperation Treaty (PCT) process, in the US Patent Office, before you file outside the United States.

Many other countries have the same rule. So, if part of your invention is being developed in another country, it’s best, with your patent professional, to make sure you’re not losing your rights by mistakenly filing first in the wrong place.