Part of the System: You and Your Voting…

Part of the System: You and Your Voting Machine 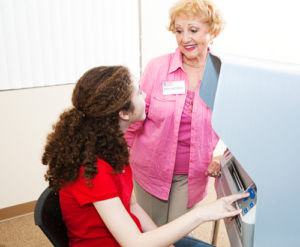 This year is an election year. It’s a very important federal election, with the office of the President at the top of the ticket. Everybody in the House of Representatives is up for election, as well as a third of the Senate. Although federal offices are on the line, voting is controlled by individual states. Each state has its own rules for voting and its own way of conducting the election.

A Little History on Voting Machines

When I was growing up, I used to go to the polls with my parents. I remember them being handed a paper ballot, then going into a booth, closing the curtain, marking the paper ballot, and returning it all folded up, then placing it into a ballot box. At the end of the day when the polls closed, election workers would take the ballot boxes to a central location, and they would slowly and painfully count the votes, and report the tally to a central office. This was time-consuming, and the results of the election would take a couple of days before we knew who actually won. Nowadays, in the information age, that just seems intolerable.

Needless to say, like all human endeavors, there are inventions for voting advances that we don’t think too much about. Back as early as 1941, Ransom Shoup filed a patent application and was granted US Patent 2,271,958, for a mechanical counter that used a lever to count votes. If you pulled down the lever, the counter would move by one and would be locked in place so it couldn’t go backwards.

That was followed by other mechanical devices that allowed a machine to have multiple counters, one for each candidate, so that the vote could be efficiently counted. Then, all that the poll workers had to do at the end of the day was go to the back of the machine and see the number of votes that were tallied by the counter. We became more concerned about privacy, so back in 1958, we had patent number 2,826,365, again by the same gentleman that started this whole thing. Mr. Shoup’s patent allowed the curtain to lock closed behind you when you went in to cast your votes.

There are many patents—way over 500 patents in the United States—for voting machines. If you go into the Google® Patent database, you’ll find many more. Lots of times, ATM machines are cross-referenced with voting machines, because their technology is very similar. There is even a patent, US Patent D728,676 by a company called Everyone Counts, Inc., for a voting machine terminal that has an aesthetic design that makes it a pleasing experience to go in and use a voting machine.

Right now, there’s a patent pending for a secure electronic system for counting votes. We think of voting machines as mainly electronic. That’s not without controversy, of course, because people have become aware that these voting machines can be hacked like any other electronic device. There’s tremendous fear that a foreign power might even get involved in hacking into our election. Interestingly, there is a pending patent application that uses what’s called bitcoin technology or blockchain technology, based on the belief that bitcoin transactions are more secure or that a voting system based on blockchain would be more secure in the electronic age.

When you go to cast your vote, wherever you are, just remember that somebody somewhere probably invented and has or had a patent on the terminal that you’re using to cast your vote. Even if you’re marking a paper ballot, like they do in New York, it’s going to be optically scanned, and somebody has a patent on that technology, too. Just like everything else in your life, at some time, somebody had to invent it.

Don’t forget that it’s important to vote and be part of the system! Please contact me with questions or comments today.